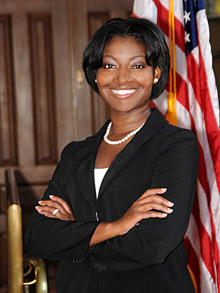 A trailblazer by the age of 23, Alisha Morgan became the first African-American in Cobb County and youngest person to ever be elected to the Georgia House of Representatives in 2002. Fast forward six years later, and the poised 29 year-old Spelman College graduate is busy contemplating running for Congress or planning her next motivational speech to be delivered unto a crowd of high school students and faculty.

As she clutches the podium, the audience sees a business woman, a wife, and a mother whose journey towards success is guided by her faith in God and a belief in the power of self.

“Age in particular is not a determining factor of when something should happen. It is more about what you bring to the table. Your passion, your ideas and your ability to fill a void is what matters,” says Morgan.

Apparently, the people agree. The Miami native’s ability to lead developed while she was still in grade school. She recalls her mother toting her to town hall meetings where she was exposed to a variety of people in search of change.

“At the community meetings I would meet everybody from homeless people to community advocates like Dr. Joseph Lowery, whom I spent a lot of time with. I grew up in the NAACP [National Association for the Advancement of Colored People], and these life experiences contributed to my drive,” says Morgan.

Now all grown up, Morgan has served seven consecutive years on the Children and Youth, Education, and Governmental Affairs Committees within the Georgia House of Representatives. She is a life member and former President of the NAACP State Youth and College Division, a Community Talk show host for Atlanta’s 1380 WAOK AM Talk radio station, and  Program Manager for the non-profit organization “People for the American Way Foundation,” geared towards providing leadership development and networking opportunities for elected officials ages 35 and under across the country.

Her lists of accomplishments are vast, from being named one of fifteen women in Essence Magazine’s  “New Power Generation,” to sponsoring and implementing over 40 new programs and policies for Georgia’s school system. These policies include the “Leave my Child Alone Act,” which requires school systems to notify parents before military recruiters can attempt to solicit to students. The “District 39 Lobby Day” was also implemented by Morgan, allowing 100 young people and adults inside the State Capitol to learn about the political process through hands on experience.

Obviously, there is no typical day in the life of this state representative. From sunrise to sunset, Morgan stays busy. With the many pressures and demands of being a public figure, it is quite easy to overlook the fact that she is also a happily married woman and a new mother.

“My husband has always been supportive,” says Morgan. “Before we got married, we dated during my run for office and he knew what my life was like. Now, we have a daughter and things are a bit more challenging,” adds Morgan.

“It is something I am still trying to master because it is hard being a professional woman and wanting to be an outstanding mother and wife.”

To help balance things, Morgan organizes a schedule. Sundays are family days and all requests and offers are put on hold until Monday morning. She makes sure to take time out for herself. In fact, there is a day marked on her calendar just for pampering and shopping, every working woman’s guilty pleasure. However, the real challenge for Morgan is saying ‘no.”

“I have had to learn to say ‘no’ more. Naturally, I want to help people, but I have to prioritize. If I am asked to do something that is outside of my focus area, generally I am forced to turn it down,” says Morgan.

As her family expands, Morgan’s message of courage has also spread to those quite close to her. Her husband David announced this year that he will run for Cobb County School Board. Despite the occasional political mudslinging from his opponents, Morgan is optimistic about her husband’s destiny and their ability to become a community service powerhouse.

“I learned the true meaning of the scripture that reads, ‘no weapons formed against me shall prosper,” she said. “When it is time for me to encourage people, I have a story to share with them about how you can overcome challenges, even when the odds are stacked against you. As for running for Congress, I feel God has put me where he wants me to be for right now.”

Mo Stegall Shares His Personal Story of Tragedy To Triumph