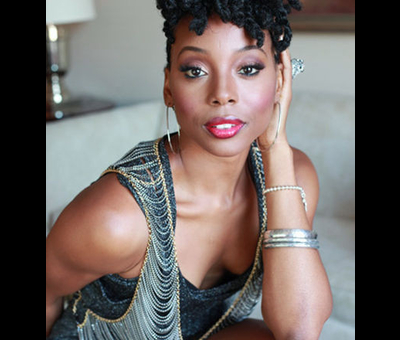 With a military chaplain father and an educator-turned- minister mother, Actress Erica Ash is well-rooted in the fine art of resilience and reinvention.

From her break-out role as “Nala” in the Broadway production of “The Lion King,” to her stints on popular television comedies and sketch shows such as, “MADtv”, “The Big Gay Sketch Show,” “Real Husbands of Hollywood,” and more recent dramatic TV roles on ” Survivor’s Remorse” and  “In Contempt,” Ash’s transitions within the entertainment industry has been met with its fair share of successes, disappointments and rejections.  With an adaptability that helped to land her first feature film as “Kendra” in “Scary Movie 5”, the young actress and 2010 NAACP Theatre Award recipient reflects on her love of the arts and how her spirituality fuels her success.

The childhood premonition became reality after the ambitious, pre-med graduate decided to hop on a plane to Japan for a one-year stint as an English instructor before heading to medical school. Upon arrival, Ash’s excitement was met with her first disappointment when the teaching contract she agreed to in the states differed from the contract handed to her in Japan.

“The contract handed to me had different money, different housing arrangements, different job descriptions…I just got the bait and switch,” says Ash.

While discussing the situation with a colleague, Ash’s speaking voice became the topic of interest as the colleague inquired if she was a singer. “I thought, well, I can [sing],” says Ash. The impromptu change in conversation landed Ash her first gig as a background singer for a Japanese song artist and set off a series of life- altering opportunities and disappointments for the young starlet.

“I had no formal training [in] singing. As a background singer, my voice was covered a lot, so you couldn’t tell whether I could sing or not. For my first gig, where I sang by myself, I was fired in the middle of the gig because I was so ill-prepared. I had literally looked out at the back of the room and saw all these Japanese faces and I see them bringing this other black girl and I was like, ‘oh, what is she doing here?’” reflects Ash.

The actress’ knack for story telling is apparent as she describes the next sequence of events with her own brand of reflective humor, making a devastating experience a hilarious one at best.

“I see the lady saying ‘come off stage, come off stage.’ Then, [the lady] says ‘thank you very much, you can go home,” recalls Ash. “I’m like, wait a minute, I’m not done… I was fired because my voice was not hitting it for them.  People say they [the Japanese], have a more forgiving audience. Well, they weren’t,” laughs Ash.

Still, the self-proclaimed “military brat” went from that experience to figuring out what she could do to make things better. She began inquiring about strengthening her voice and eventually ran into an American stay-at-home mother living in Japan, who had a college degree in music and wanted to train as a vocal coach. The fateful matchup helped Ash to reach higher vocal ranges and develop her vocal technique.  However, her hard work was tainted by an industry black-balling.

“By then, I’d gotten a bad reputation because everybody talks… I couldn’t get hired to save my life. I was like, I have got to fix this,” says Ash. “I looked up any entertainment company in the phone book. I called about twenty of them. Two of them said they would talk with me,” continues Ash, who later negotiated a deal with a company and began to re-brand her name.

“I went from being fired in Japan to becoming one of the highest paid singers in Japan,” she says.

With each rejection, Ash credits her unshakable resilience within her spiritual beliefs.

“God can take us through what we see as setbacks and maybe reinforce things because there may be no other way to get you to learn a lesson and let you receive a key piece that you may need to go even further,” says Ash. “Every job has come to me; that is why I am so spiritual because this isn’t what I set out to do. This is what God led me to do…,” she says.

As each experience seemed to pull a new side of artistry out of the budding talent, Ash soon began traveling the world as a fashion model for Japan’s royal family after another chance encounter. While singing backup, the ebony beauty’s striking features sparked the interest of an international modeling team and she was signed to tour in Japan, Korea and New York as a premiere model.  Her travels with the team eventually led to a new opportunity as a ringside announcer for the sport of Kickboxing.  Again, the unusual opportunity resulted from fate, as Ash discovered that the voice announcer she heard at a sporting event was an old friend well-connected in the field. The announcer job was the springboard for her later work as a voice-over artist for various commercials and animations. For Ash, every new venture made her resume as diverse as the many characters she would later portray on screen.

“People would say, ‘hey try this, I see this in you,’ and just with my spirit being open, that’s how I’ve gotten as far as I’ve gotten,” says Ash.

The career highs continued when the multi-talented Ash left Japan after three years and made her debut on Broadway where she discovered her true passion.

“This is the thing, while I was on the doctor path, I had a dream that I was standing on a stage and it was pitch black and a single light was shining down on my face and my mouth was wide open like I was yelling. I’m like, what in the world is that,” says Ash.

“When I came back from Japan, I got the role of “Nala” in “The Lion King.”  “Nala” has this big number where the single light shines on her face while she is singing and all the other lionesses clear the stage… That’s when it hit me. That was my dream,” explains Ash.

As the blossoming star’s career soon transcended into television and film, the actress’ success remained grounded in her positive outlook on life.

“It’s all about what you put out there. I am so happy to be alive and I take that joy with me where ever I go. I feel like people feel that and are drawn to it,” says Ash.

Then suddenly, health concerns put a halt to the actress’ career.

“I’m like wow, this is great. I have arrived and then suddenly, I’m sitting down and I can’t do anything. I’m like, oh my goodness, but [God] I trust you any way,” Ash says.

While reflecting on dark times within an industry of unpredictability, the actress had to stay motivated while dealing with her personal health and financial consistency.

“Things were dry, but then God brought it all back to me again. I think that’s what keeps me humble because I know at any moment, God can send me that lesson again to say,‘ I need to make sure that you are doing this for me and not for you,’ “ says Ash.

While centering her passion on the fact that her work is bigger than herself, the rejection was never a stopping point for Ash.

The resilient actress continues to make strides in Hollywood with a feature role in the psychological thriller “Random” and is one of very few actresses to be featured in both a Harvey and Bob Weinstein film.  She is also not going too far from her theatre roots with plans to return to Broadway as Nina Simone in an upcoming production,  cementing her legacy as an entertainer that cannot be pigeoned-holed in a box.

“My lifelong goal is to travel to Antarctica and see a 5-foot penguin,” jokes the actress, who has traveled to all, but two continents.  However, her heart is for the people she entertains.

“I really want to inspire as many people as possible,” says Ash. “That is my ultimate personal goal. I can see myself going around speaking to people as a motivational speaker and God has given me all this to back it up.”

Quote of The Day

Strength and Strategy: Re-framing Trauma to Triumph within Social Justice