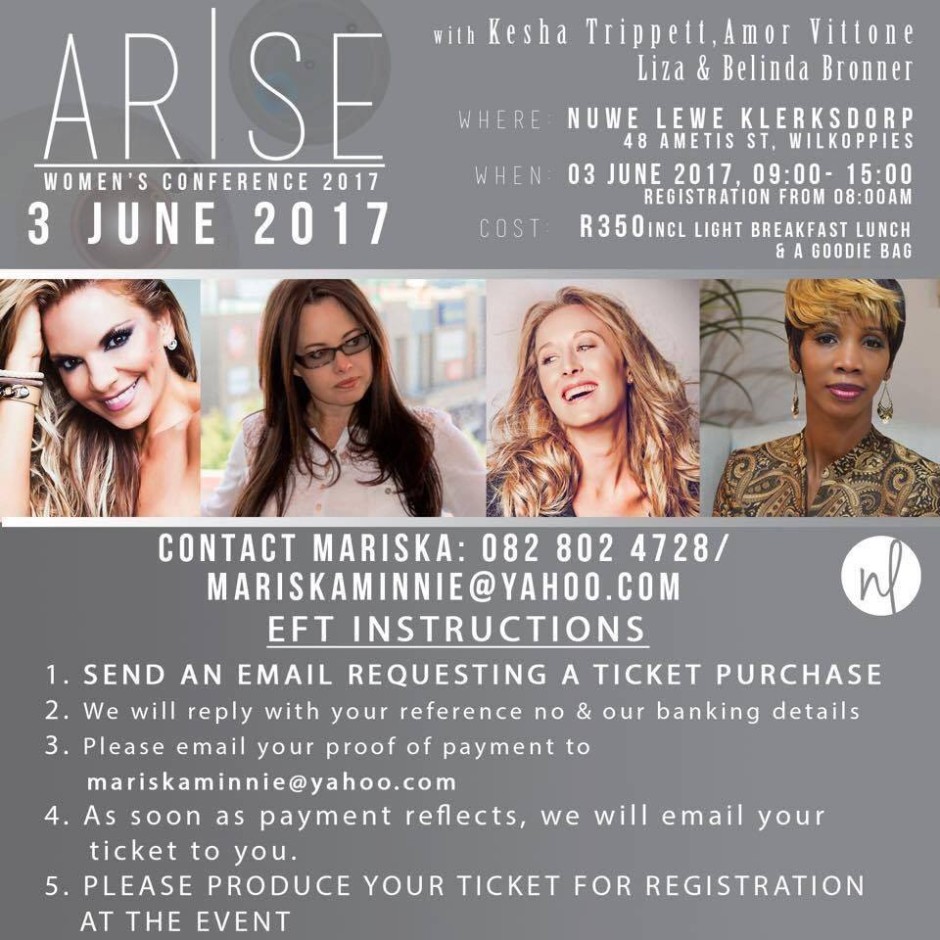 “Arise,” is the powerful verb used in Isaiah 60:1 , that calls for God’s people to awaken and move on the knowledge that their light has come, empowering them to shine! As this message continues to give revelation to the broken, the hurting and the hopeless, it is also a message for those moving in faith and in purpose. It is a reminder that God is indeed not finished yet! His best works will be through His people.

On June 3, 2017, Minister Kesha Trippett, a long-time supporter of Mojo Media Online, will serve as  guest speaker at the Arise Women’s Conference held in Wilkoppies, Klerksdorp, South Africa. This dynamic woman of God is among good company, with powerful musicians and leaders Amor Vittone and Liza and Belinda Bronner joining forces to empower and restore through the power of the Gospel. It will be a life-changing event, you do not want to miss!

Kesha Trippett is founder of Daughters of the King (DOTK) International Ministries. She has ministered at women conferences, counseled, mentored, and discipled many. Possessing a deep passion to inspire, revive, and unite women, Kesha launched Daughters of the King Daily Devotional on October 9, 2012, which is a writing ministry that has experienced phenomenal growth and international reach. She graduated from Georgia Southern University with a Bachelor of Arts degree and a minor in Business Administration. She went on to graduate with honors from Word of Faith Bible Training Center and is a licensed minister of the Gospel.  She desires for women all over the world to experience the love of God and the reality of His blessings in their lives.

Amor Vittone is a South African media personality, singer and actress. She is also a former Miss Johannesburg winner. As a television presonality, she has presented television shows on Kyknet, M-Net and SABC 3. Amor was nominated for a SAMA (South African Music Award) in the category “Best Afrikaans pop album” in 2006. She was the only female artist nominated in this category. Amor is the patron of Irene Homes for Mentally and Physically Disabled in Pretoria.

Liza Bronner is Known for such Afrikaans-language albums as Asemloos and Vir eers is dit net ek. This popular South African singer and songwriter also became famous as the champion of a reality television competition for the lead role in a stage musical titled Liefling. A philanthropist as well as a performer, she is involved in several Hanna Charity and Empowerment Foundation events.

Belinda Bronner is a gifted musician, known for her Afrikaans-language album Heilig is U Naam which also features fellow musician, Liza Bronner. Belinda also serves as area manager for Hanna Charity and Empowerment Foundation. She enjoys developing creative ways to uplift and inspire .

Quote of The Day: The Unpopular

What is this pandemic revealing about our relationships? (Article re-published from ETQW Newsletter)

Mommy and Mogul: How To Successfully Wear Both Titles